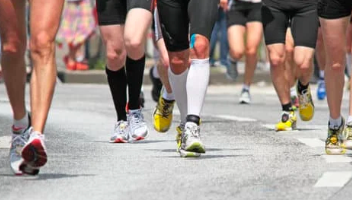 Runners who competed in the New York City Marathon were less likely to become injured during the lead-up to the event if they avoided rapid increases in weekly mileage, whether they were newcomers to the sport or experienced racers, according to a study from researchers at Hospital for Special Surgery.

The findings have been published online ahead of print by the British Journal of Sports Medicine.

For the study, the researchers partnered with Strava, an internet service that tracks physical exercise like running and cycling, to monitor the training habits of 735 runners who were training for the 2019 New York City Marathon.

Over 16 weeks of training tracked by Strava, 40% of runners in the study reported an injury, of which 30 (4.1%) were serious enough to prevent participation in the marathon. Another 12 runners (16%) suffered injuries during or immediately after the race.

To assess the effects of training rates on the risk of injury, the researchers used a measure called the acute:chronic workload ratio (ACWR), which compares how much training a person does in a short amount of time to their training over a longer period. An ACWR above 1.5 means the weekly mileage in the past week was 50% higher than the average weekly mileage over the past 28 days.

Runners who reported an injury during the first 4 weeks of training spent more days with an ACWR at or above 1.5 than uninjured runners (P=0.009). When controlling for age, sex, body mass index, and running experience, the researchers also found that the number of days when the ACWR was at or above 1.5 was associated with injury (logistic regression odds ratio 1.06, P=0.002).

“We now have a more robust understanding of the health of runners of the New York City Marathon – including their backgrounds, training patterns, if and when they became injured or ill, and the various ways that their training patterns were associated with injury,” said lead author Brett G. Toresdahl, MD, Research Director for the Primary Sports Medicine Service at Hospital for Special Surgery.

“We hope these insights will motivate runners to avoid rapid increases in training volume that we found were associated with injury.”

The study also found that a frequently used guide for increasing training doesn’t appear to protect against injury in preparation for a marathon. Historically, runners have used the “10% rule,” which advises against increasing weekly running mileage by more than 10% over the previous week.

The researchers, however, did not observe a link between exceeding the 10% rule and more injuries, and the perception that novice and older runners were at higher risk for injury was not true: The risk of injury was the same among all runners, regardless of age, sex, body mass index, experience level, or goal finishing times.

Strenuous exercise has been associated with changes in the immune system, which might in turn leave athletes more prone to infectious illnesses. The study found that 27.2% of runners reported falling ill during training, mostly with upper respiratory infections and gastrointestinal complaints. Although these runners experienced interruptions in training by an illness, it was rare for an illness to prevent a runner from participating in the race.

“The results reinforce the importance of smart training – running consistently, increasing mileage slowly, and being flexible with a plan when interruptions occur,” Dr. Toresdahl said. “In the future, we hope to explore additional factors that may play a role in the development of injuries such as the effect of weather and altitude during marathon training.”