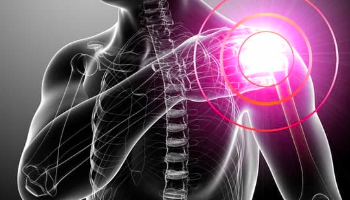 Adhesive capsulitis – commonly known as frozen shoulder – occurs in up to 10% of people at some time in their lives, resulting in painful and progressive loss of shoulder motion. Although the exact cause is unclear, adhesive capsulitis sometimes occurs after an injury, surgery, or other condition that reduces shoulder mobility. Loss of motion results from fibrosis of the capsule around the shoulder joint.

Certain clinical factors are associated with an increased risk of adhesive capsulitis, including diabetes, thyroid disease, and smoking. Recent studies have suggested that the risk is higher in people with affected relatives, suggesting a possible genetic predisposition.

With that in mind, researchers from Hospital for Special Surgery performed a genome-wide association study that has identified specific genes associated with a substantially increased risk of developing adhesive capsulitis – 2 of them never before implicated in the risk of adhesive capsulitis.

The researchers believe their findings, published online ahead of print by The Journal of Bone & Joint Surgery can provide new insights into the causes, prevention, and treatment of adhesive capsulitis.

The study authors used data from a large British database called the UK Biobank, which includes genetic and health data on approximately 500,000 patients. Their analysis focused on 2142 patients with an ICD-10 code for adhesive capsulitis compared who patients who did not have this diagnosis. Possible genetic associations were adjusted for other factors, including sex, diabetes, thyroid disease, history of shoulder dislocation, and smoking.

The strongest association was found for rs34315830, the gene variant in WNT7B. This finding was consistent with previous studies that reported a possible link between WNT7B and adhesive capsulitis, along with several other orthopaedic-related conditions. Weaker associations were also found for rs2965196 (in MAU2) and rs1912256 (in POU1F1), both previously unreported genetic loci.

All 3 associations remained significant after adjustment for other factors. Together, the 3 variants carried nearly a six-fold increase in the odds of developing adhesive capsulitis, which is greater than the risk associated with diabetes (about fourfold) or thyroid disease (less than twofold) and second only to smoking (about 11-fold).

Implications of the New Findings

The findings may lend new insights into the development of adhesive capsulitis.

In particular, genes located at WNT7B have been shown to be expressed in osteoblasts and to be involved in regulating fibrosis, along with a wide range of other functions. The 2 newly reported loci, POU1F1 and MAU2, are involved with cell division, which might provide clues to the cellular mechanism by which adhesive capsulitis develops.

The researchers note some key limitations of their analysis, including the need for further studies of genetic associations in groups other than the white, British population that predominates in the UK Biobank.

Meanwhile, the new study identifies several gene loci with the ability to predict a clinically relevant risk of adhesive capsulitis.

“Refining the genetic risk metric and including it in a larger clinical model could allow patients at risk for future adhesive capsulitis to be identified,” the authors said, “leading to efforts at prevention, early diagnosis, and ultimately improved outcomes.”