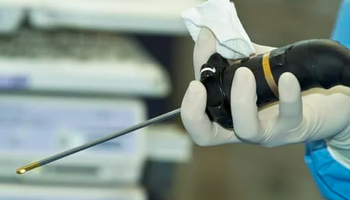 Hip arthroscopy is one of the fastest growing orthopaedic procedures in the US, and despite being minimally invasive, it is a painful procedure for which analgesia can be difficult to manage.

“It is important to provide optimal analgesia [for post-hip arthroscopy patients] to help combat the over reliance on opioids for pain relief, [as well as] to facilitate discharge and patient satisfaction,” said David H. Kim, MD, an anesthesiologist at Hospital for Special Surgery (HSS).

The increased use of novel motor-sparing, ultrasound-guided nerve blocks – particularly pericapsular nerve group (PENG) and lateral femoral cutaneous nerve (LFCN) blocks – have been introduced as possible opioid-sparing options for helping to manage pain after hip arthroscopy. However, when performed separately, PENG and LFCN have been shown to provide suboptimal pain relief or to cause quadriceps weakness if a high volume of injectate spreads to the femoral nerve.

Could combining them improve pain management after hip arthroscopy?

A retrospective cohort study suggests that the answer may be yes: Researchers from HSS have found that the combined use of PENG and LFCN blocks was associated with faster discharge from the PACU after hip arthroscopy, as well as a clinically significant reduction in postoperative opioid use.

For the study, the researchers identified 1559 patients who had undergone elective hip arthroscopy at HSS between January 2019 and December 2020. Of that group, 268 patients had received a neuraxial anesthesia and a nerve block. The researchers excluded patients with incomplete charts and those who had general anesthesia, had undergone bilateral hip arthroscopy, had received other peripheral nerve blocks, or who had chronic pain syndromes.

The researchers found that patients who received a PENG and an LFCN block:

Patients in the group who received the PENG block alone did not show a significant difference in opioid reduction, but they were discharged from the PACU earlier than the control group.

These results demonstrate use of the combined PENG and LFCN block could be an opioid-sparing method of pain relief after hip arthroscopy. “PENG combined with a lateral femoral cutaneous nerve block decreased opioid consumption, and facilitated expedient discharges,” Dr. Kim said.

“Follow-up research should include a prospective randomized controlled trial comparing PENG, PENG with lateral femoral cutaneous nerve block, and no blocks, with primary focus on analgesia and motor strength”