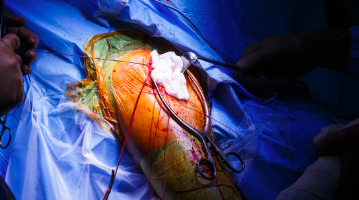 Glenoid component loosening is a significant concern in total shoulder arthroplasty. In fact, it’s the number 1 reason for revision procedures.

Manufacturers often modify their implants to combat problems like this, with designs, for example, that reduce the risk of glenoid component failure by reducing radiolucent lines at the bone-cement interface, or that improve fixation by making the implant more stable.

In a more recent study from the Florida Orthopaedic Institute, researchers took a 2-pronged approach to evaluating a newer implant design:

Their findings have been published online ahead of print by the Journal of Shoulder and Elbow Surgery.

The researchers had 2 working hypotheses for the biomechanical evaluation:

They selected 2 glenoid components manufactured by DJO Surgical to test their hypotheses:

A single surgeon implanted all glenoid components according to the manufacturer’s recommended surgical technique. The components were implanted in various testing conditions:

Mechanical testing was performed according to ASTM F2028-14:

The average of the last 5 cycles for each time point represented the component motion.

A fellowship-trained orthopaedic surgeon specializing in shoulder and elbow surgery performed a blinded review of the radiographs that were taken of the study participants at 3 months, 1 year, and 2 years after surgery, noting the presence of radiolucent lines (modified Franklin grade and Lazarus grade) and glenoid seating at these timepoints. Radiographic views included:

Each patient also had a 2-dimensional CT scan to assess glenoid morphology and assign a Walch classification.

In the biomechanical arm of the study, the researchers found that overall, it took more time and more effort (more mallet hits with greater force per mallet strike) to fully seat the self-pressurizing glenoid than for the traditional glenoid.  Moreover, the traditional glenoid component was found to have less resistance-to-seat.

The researchers said the greater resistance-to-seat was likely due to the non-uniform thickness of the pegs for the self-pressurizing glenoid compared with the traditional design, with the difference in this geometric feature causing greater frictional resistance between the pegs and bony interface. As a result, the surgical technique needed to fully seat the self-pressurizing glenoid was different than for a traditional design.

This is important, the researcher said: Understanding when a surgical technique needs to be altered to accommodate the differences in a newer implant is crucial for ensuring that the implant is fully seated. This will help to reduce early glenoid component loosening.

The results of the biomechanical tests of micromotion under physiologic loads “provide evidence that glenoid component fixation can reliably be achieved with improved geometry and appropriate cement technique,” the researchers said.

At 2 years after surgery, no patient in either group had undergone revision total shoulder arthroplasty. In addition, the researchers saw no differences between groups in the clinical outcome scores (ASES, SST, VAS).