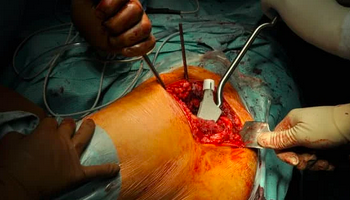 Most studies of TXA use in surgical hip fracture patients, however, have excluded those who would be at risk for thromboembolic complications – such as deep vein thrombosis (DVT), pulmonary embolism (PE), cerebrovascular accident, or myocardial infarction – because they are taking an anticoagulant drug to prevent blood clot formation. Tranexamic acid, of course, reduces the risk of bleeding by promoting clot formation, seemingly a contraindication for TXA in patients taking an anticoagulant.

But should TXA be contraindicated in these high-risk patients? Are they really more likely to experience serious thromboembolic complications, or even die, if they receive TXA?

Probably not, according to research from Mayo Clinic. Citing a “concerning” lack of data, the researchers sought to expand the literature on TXA in high-risk hip fracture patients with 2 papers on the topic based on their review of data from patients who had undergone hip fracture repair at 4 hospitals within the Mayo Clinic health system.

In their first study, [1] they concluded that TXA could be safely administered to high-risk patients undergoing non-elective hemiarthroplasty or total hip arthroplasty to treat displaced femoral neck fractures. More than 1000 propensity-matched high-risk patients were included in this study, and the researchers said there was no association between death, DVT, PE, cerebrovascular accident, or myocardial infarction among the patients who had received TXA. [1]

They came to the same conclusion in the second study of high-risk patients undergoing surgical repair of intertrochanteric hip fractures. Their findings were recently published online ahead of print by The Journal of Bone & Joint Surgery.

For the second study, the researchers identified 1147 Mayo Clinic patients who had undergone surgery for intertrochanteric fractures between 2015 and 2019. These were older patients, with an average age of 81.5 years. About half of the patients had conditions that could increase the risk of blood clot-related complications, such as atrial fibrillation; clotting abnormalities; and previous DVT, PE, or cerebrovascular accident.

They then compared the risk of serious complications and death after surgical repair of an intertrochanteric fracture among patients who did and who did not receive TXA. The study included separate analyses of 564 high-risk patients and the entire population of 1147 patients, with adjustment for the likelihood of adverse outcomes (based on propensity score).

The results showed no association between TXA administration and the risk of death, DVT, PE, cerebrovascular accident, or myocardial infarction within 90 days of surgery in either analysis.

Although not designed to evaluate the effectiveness of TXA, the study also showed a 3% decrease in the risk of blood transfusion among both high-risk and low-risk patients receiving TXA. However, the difference was not significant.

The researchers noted that their study – which included a large number of high-risk patients – is consistent with previous studies showing that TXA is safe for patients with an intertrochanteric fracture. “[T]his study provides support for TXA administration’s safety profile for all patients presenting for surgical repair of [intertrochanteric] fractures,” they said.