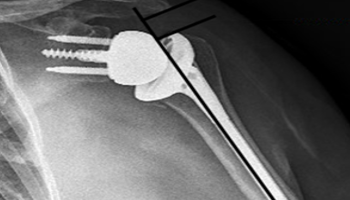 Acromial fracture is a known complication of reverse shoulder arthroplasty, and it is often associated with poor clinical outcomes.

Multiple mechanisms have been proposed as the cause of these fractures. A drawback of previous research, however, is that study authors have combined all types of acromial fractures (ie, all Levy types) into a single “fracture” group. This fails to take into account differences in the fractures based on anatomic location, making it difficult to pinpoint potential causes of each fracture type.

In addition, few studies have evaluated clinical outcomes of acromial fractures through the lens of fracture location and displacement. Non-operative management is associated with poor fracture union rates; however, little is known about effective management strategies for these fractures.

A new retrospective, multicenter study, published online ahead of print by the Journal of Shoulder and Elbow Surgeons, takes on both issues by evaluating:

For the study, the researchers identified 87 patients who had developed an acromial fracture after undergoing reverse shoulder arthroplasty at their 3 institutions between January 2004 and July 2018.

Applying the study’s exclusion criteria left the researchers with 42 patients for the first part of the study: radiographic evaluation of acromial morphology. These patients were divided into 2 groups:

Patients with Levy type III fractures were excluded because these fractures involve the scapular spine and the researchers wanted to focus on acromial fractures (Levy type I and Levy type II).

Twenty-two patients had been followed for at least 2 years and were, therefore, available for the second part of the study: evaluation of clinical outcomes. They were stratified into 2 groups according to their pre- and postoperative ASES scores:

The 2 groups were compared clinically and radiographically. Radiographic comparisons included fracture location and displacement, the latter of which was based on acromiohumeral distance (AHD), acromion-glenosphere distance (AGD), and acromion-cup distance (ACD) (Figure 1).

Figure 1. Radiographic measurements: The acromion-glenosphere distance, measured on a scapular Y-view (A), and the acromion-cup distance (B). 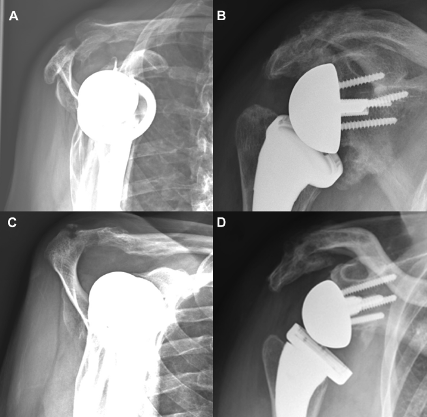 The researchers noted that previous studies have found that an increase in acromial stress, resulting from an increase in deltoid tension, puts patients at higher risk for fracture. They had hypothesized, based on these earlier findings, that differences in the acromial slope could alter deltoid fracture and impact the pattern of the fracture.

They further described possible mechanisms for these fractures, noting that “[f]ractures in the Levy I region had a transverse pattern, suggesting a tension mechanism due to deltoid pull, resulting in avulsion of the anterior acromion, whereas Levy type II fractures appeared to be oblique, suggesting impaction that may be due to impingement of the greater tuberosity on the lateral aspect of the acromion.”

They also noted that preoperatively, all patients had a superiorly migrated humeral head engaging the acromion. They theorized that “this finding sheds light on the fact that these fractures occur partly as a result of the weakening of the acromion by the articulating humeral head, which may lower the incidence threshold of these fractures.”

They recommend, based on their findings, that surgeons:

In addition, the researchers suggested that surgeons consider additional interventions, including surgical reduction and fracture fixation, in patients with more severely displaced fractures, as the study findings confirmed their hypothesis that patients with greater fracture displacement would have worse outcomes.