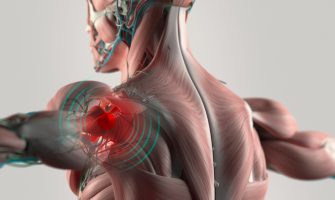 Is a sling necessary for immobilization after rotator cuff repair?

Probably not, according to a new study from Switzerland: Researchers found that for patients with small- to medium-sized rotator cuff tears repaired arthroscopically, not wearing a sling – and engaging in early motion of the shoulder after surgery – leads to less pain and better shoulder function at 6 months after surgery.

The findings of the study by Tirefort et al, published in The Journal of Bone & Joint Surgery, are consistent with the recent trend toward early-motion rehabilitation programs after rotator cuff surgery, rather than 4 to 6 weeks of immobilization.

The study included 80 patients undergoing arthroscopic surgery to repair a rotator cuff tear of 3 cm or less at a single hospital in Switzerland. Patients were divided into 2 groups:

Ten days after surgery, pain scores were similar between groups (5.2 for both groups). One-and-a-half months after surgery, patients who did not wear a sling had increased shoulder motion, including external rotation and active elevation. Both groups showed continued improvement at 3 months, but shoulder elevation remained greater in the no-sling group. By 6 months, measures of shoulder movement were similar between groups.

Ultrasound examinations performed at 6 months showed no significant differences between the sling and no-sling groups, including the integrity of the rotator cuff repair. The American Shoulder and Elbow Surgeons (ASES) score was unaffected by whether or not the patient wore a sling.

However, patients in the no-sling group rated their shoulder at about 86% of normal on the Single Assessment Numeric Evaluation (SANE) scale, compared with 79% in the sling group. Six-month pain scores were also lower for patients who didn’t wear a sling: 0.8 versus 1.5. Wearing a sling was significantly associated with higher pain scores, even after adjustment for other factors.

The results show that the no-sling approach with early movement leads to faster recovery of shoulder motion, less pain, and better overall patient ratings in the first 6 months after surgery. “Postoperative mobilization with a sling may therefore not be required for patients treated for a small or medium tear,” the authors conclude. They note that their findings corroborate the results of other recent studies reporting the benefits of early-motion rehabilitation protocols.