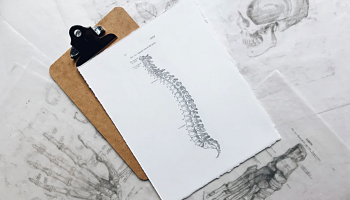 Although anterior cervical discectomy and fusion (ACDF) surgery has a high success rate, it is also commonly associated with postoperative dysphagia. Local administration of corticosteroids intraoperatively has been proposed as a way of reducing ACDF-related dysphagia but is controversial.

A recent study from Hospital for Special Surgery (HSS) adds to the literature supporting the use of local corticosteroids, finding that steroid administration during ACDF surgery helps to reduce postoperative dysphagia.

The study was scheduled for presentation at the annual meeting of the American Academy of Orthopaedic Surgeons (AAOS), canceled due to the COVID-19 pandemic. The abstract is now available as part of the AAOS Virtual Education Experience.

“The severity of dysphagia experienced by patients following ACDFs can range from a mild and subjective discomfort such as fullness of the throat and soreness to a serious medical issue such as malnutrition, social isolation, aspiration pneumonia or airway obstruction,” said Todd Albert, MD, lead investigator and surgeon-in-chief emeritus at HSS.

“Many studies show that most dysphagia-related symptoms occur in the early phase of the recovery period and gradually dissipate over time.”

Dr. Albert and colleagues sought to determine if local administration of steroids during ACDF could reduce postoperative dysphasia. They enrolled 106 patients in the study; 95 patients completed the 2 validated dysphaghia-specific questionnaires – the EAT-10 and the SWAL-QOL – preoperatively, on POD1 and POD2, and at 1 month after surgery and were included in the analysis.

All patients in the study were scheduled for multilevel ACDF surgery at HSS, with the most common reasons for the procedure being cervical spondylosis, radiculopathy, myeloradiculopathy, and myelopathy. The mean age of patients was 57 years old, and 52% of patients were male.

The study participants were randomized in a double-blind fashion into 2 groups:

“To reduce any possible bias associated with the study, our hypothesis was that there would be no difference in swallowing difficulty between the patients who receive intraoperative topical steroids and those who do not receive the steroids,” Dr. Albert said.

Comparison of the 2 groups showed no significant differences in demographics, diagnosis, number of levels fused in the cervical spine, or time necessary to perform the surgery. That was not the case for analysis of study participants’ responses to the dysphagia-specific questionnaires: Patients in the steroid group had significantly better dysphagia scores than patients in the control group at all postoperative time points.

“Our study demonstrated the benefit of [intraoperative steroids] with this delivery method to prophylactically reduce swallowing difficulty following ACDF surgery,” the researchers concluded, noting that superior results for the steroid group on the first 2 postoperative days were maintained at 1 month after surgery.

Dr. Albert and his colleagues are planning a future study to evaluate long-term outcomes when steroids are used in ACDF surgery.