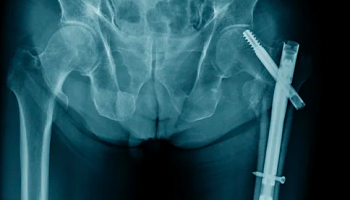 Dietary supplementation with conditionally essential amino acids (CEAA) reduces complications and prevents skeletal muscle wasting in patients recovering from fracture fixation surgery, according to the results of a clinical trial published online ahead of print in The Journal of Bone & Joint Surgery.

The study, from the University of Iowa Hospital and Clinics in Iowa City, supports the use of widely available CEAA supplements to promote recovery and preserve function in patients undergoing surgery for repair of major fractures. “Our results suggest that this inexpensive, low-risk intervention has considerable potential to improve outcomes after fracture fixation,” the study authors said.

Previous studies have reported that CEAA supplementation can improve wound healing and other outcomes in patients with a variety of conditions, including postoperative recovery.

For this study, the researchers included 400 patients who were indicated for operative fixation of extremity or pelvic fractures at their level 1 trauma center. Patients were stratified into 3 groups according to fracture severity:

They were then randomized to either standard postoperative nutrition (control group) or standard nutrition plus a CEAA supplement that included arginine, leucine, and glutamine (treatment group).

The researchers measured body composition (fat-free mass) at the time of surgery and then 6 and 12 weeks after surgery. They also prospectively collected data on postoperative complications.

Overall, the complication rate was significantly lower for patients who received CEAA supplementation than for compared with those who did not receive CEAA: 30.5% and 43.8%, respectively.

The treatment group also had a lower rate of non-union than the control group: 5.1% versus 13.2%, respectively. Other types of complications, including surgical site infections, were similar between groups.

Unexpectedly, the treatment group had a sharply reduced mortality rate: 0.5%, compared with 4.1% in the control group. Although the researchers could not explain the lower risk of death in patients receiving CEAA, they suggested that it might result from “unidentified confounding factors.”

Despite advances in surgical techniques, trauma patients undergoing operative fixation of extremity and pelvic fractures remain at risk of complications and prolonged loss of function. “Malnutrition is a potentially modifiable risk factor for mortality, fracture nonunion, wound complications, and increased length of stay,” the authors said.

These new results suggest that CEAA supplementation is a simple, risk-free, and inexpensive means of promoting good nutrition postoperatively in patients undergoing fracture fixation. After adjusting for other factors, the relative risk of complications is about 40% lower in patients receiving CEAA, with no reduction in fat-free mass during the early weeks of recovery.

“This study will serve as the foundation for multicenter [randomized controlled trials] that are designed to assess the impact of CEAA nutrition supplementation in reducing complications and loss of functional muscle mass in high-risk populations,” the study authors concluded.