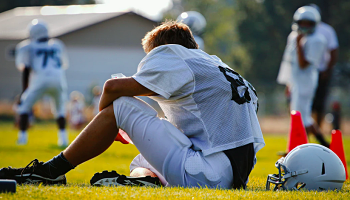 In a new study from Wellington Hsu, MD, FAAOS, the incidence of concussions in young athletes was found to be on the rise despite increased awareness of concussions in high school athletics and traumatic brain injury (TBI) laws. This analysis of injury data from 2015 to 2017 is the latest to be reported from a 13-year study evaluating trends in reported concussion proportions and rates in high school sports.

The study was scheduled for presentation at the annual meeting of the American Academy of Orthopaedic Surgeons (AAOS), canceled due to the COVID-19 pandemic, and has now been released in the AAOS Virtual Education Experience.

Since 2005, Dr. Hsu, professor of orthopaedics at Northwestern University’s Feinberg School of Medicine and senior author of the study, has collected annual reports generated by the High School Reporting Information Online (RIO) surveillance system. Dr. Hsu and his team extracted injury data from 100 high schools across the US for 9 sports:

The data included detailed information on each player (sport, age, year in school), the athlete’s injury (diagnosis, severity and return to play), the mechanism of injury, and the situation that lead to the injury.

“It’s understandable to think that with increased awareness among practitioners who diagnose concussions, the incidence would naturally rise; however, because we’ve studied and reported on concussions for a number of years now, I feel that enough time has passed and I would have expected to see the numbers start to level out,” Dr. Hsu said.

Not only did girls’ soccer players continue to have a higher proportion of concussions compared with boys’ football players (29.8% vs. 25.2%, respectively), but girls’ volleyball demonstrated the largest increase in number, proportion, and rate of concussions (+64.3%; P=0.022) compared with all other sports in this study.

“Since volleyball is generally considered a ‘low risk’ sport for concussions, this was an unexpected discovery compared to what we saw 3 years ago,” Dr. Hsu said. “The jump in both girls’ soccer and volleyball is likely due to increased participation in the sports and concussion awareness.”

Dr. Hsu plans to continue his research and is hopeful that the collective findings will lead to stronger implementation of targeted preventative measures such as rule changes, protective headgear, and contact avoidance.