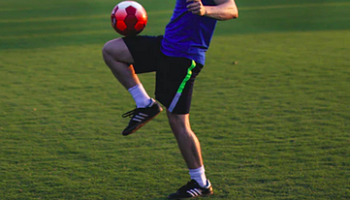 An emerging surgical technique added to the standard anterior cruciate ligament (ACL) reconstruction in high-risk adolescent athletes resulted in zero re-tears and zero graft failures after a minimum follow-up of 2 years, according to preliminary results from patients who were treated at Hospital for Special Surgery (HSS).

The results, from 28 patients under age 20, are the first to emerge from a larger study currently in progress.

This study was scheduled for presentation at the annual meeting of the American Academy of Orthopaedic Surgeons (AAOS), canceled due to the COVID-19 pandemic, and has now been published online in the AAOS Virtual Education Experience.

“An ACL re-injury in the young adolescent athlete, who has undergone an ACL reconstruction and 9 to 12 months of rehabilitation, is a devastating clinical problem that sports medicine orthopedic surgeons continue to confront in the United States and around the world,” said Frank Cordasco, MD, MS, a sports medicine surgeon at HSS and the study’s first author.

“Our goal is to reduce the risk of re-injury as these athletes return to sports and prevent additional surgery involving the same knee or the uninjured knee to the extent that is possible.”

The additional surgical technique is called a modified Lemaire IT band tenodesis, named after Marcel Lemaire, a French surgeon who originally described the technique in 1975. It is performed at the end of an ACL reconstruction and involves use of an 8-cm by 1-cm graft from the iliotibial (IT) band, which is harvested through a 5-cm incision. The graft is passed deep under the lateral collateral ligament and then secured, creating a tether or checkrein that limits the potential for recurrent rotational instability.

This technique has been used in Europe for many years and has been shown to be successful. Dr. Cordasco and has colleague, Daniel Green, MD, MS, FAAP, FACS, a pediatric orthopedic surgeon at HSS and senior study author, recently described the technique and their rationale for using it in athletes under age 20 with a high risk of re-injury in a paper published in Arthroscopy Techniques. [1]

In a study published last year in the American Journal of Sports Medicine, Dr. Cordasco and Dr. Green noted that patients in eight and ninth grade who underwent ACL reconstruction had a higher risk of re-injury and lower rates of returning to sports than patients who were in seventh grade and lower or tenth grade and higher. [2] They speculated that among the multiple risk factors, athletes in the eighth and ninth grades had a higher risk of re-injury because they return to play with athletes in the tenth grade who are skeletally mature and did not lose a year of physical and sports-specific development.

The new data reports on patients from this higher-risk age group who received an ACL reconstruction with modified Lemaire IT band tenodesis, returned to sport for at least 1 season,  and were followed for a minimum of 2 years. Patients were 14.9 years old, on average, with a range of 11.1 to 19.1 years. Dr. Cordasco and Dr. Green performed the surgeries at HSS starting in 2015.

To date, patient-reported outcomes have been positive, with all patients giving their injured joint a Single Assessment Numeric Evaluation (SANE) score higher than 90% on a scale from 0% to 100%, where 100% represents normal function. “We now have more than 100 patients in our database,” Dr. Cordasco said. “We are continuing to track outcomes and plan to publish a larger report on results for this patient population in the future.”

“We are excited about our preliminary results and plan to follow patients for at least 5 years until they reach skeletal maturity, around the age of 20,” Dr. Green said. “We anticipate there will be some failures, but we hope to see far fewer than if we had not supplemented the ACL reconstruction with this additional surgical [technique].”