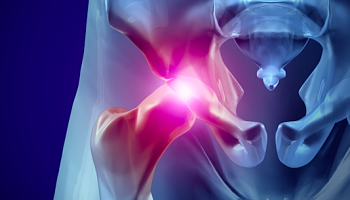 In a new study from the Hospital for Special Surgery (HSS), the percentage of patients with hip osteoarthritis (OA) who underwent total hip arthroplasty (THA) within 2 years of hip arthroscopy was found to be unacceptably high at 68%.

In addition, prior hip arthroscopy was associated with worse outcomes after THA, including significantly higher risks of revision THA, joint implant loosening, and joint infection.

“Our study is the first to quantify the clinical outcomes and risks of complications from having hip arthroscopy before total hip replacement in patients with osteoarthritis,” said senior author Alexander S. McLawhorn, MD, MBA, a hip and knee surgeon at HSS. “Our results suggest that arthroscopy should be avoided in patients with hip arthritis, especially in those over the age of 65.”

The study was scheduled for presentation at the annual meeting of the American Academy of Orthopaedic Surgeons (AAOS), canceled due to the COVID-19 pandemic. It has also been published online on HIP International. [1]

The use of hip arthroscopy has increased by more than 600% in the past 10 years, and some surgeons have used it to treat patients with hip OA in an attempt to delay or eliminate the need for THA.

“From previous patient-reported outcomes studies, we have been increasingly recognizing that these ‘clean-out procedures’ are not successful in patients with osteoarthritis,” Dr. McLawhorn said. “They tend to lead to joint replacements relatively soon after the arthroscopy because they do not solve the underlying problem.”

The study from HSS is based on a review of Medicare data from the PearlDiver Patient Records Database. The investigators identified more than 5200 patients with hip OA who had undergone THA between 2005 and 2016 and divided them into 2 groups based on whether they had undergone hip arthroscopy before THA. Each group contained 2600 patients, and a majority of patients (82%) were over age 65.

“These risk percentages may seem small, but they are critically important,” Dr. McLawhorn said. “The goal is to drive complications down to as close to zero as possible. No patient should undergo an unnecessary procedure, even if the downstream risk of a complication is small. A joint replacement infection, for example, is a life-altering event.”