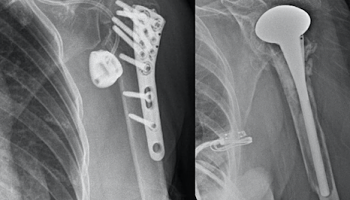 The optimal surgical management for proximal humerus fractures remains unclear, due at least in part to “the paucity of large cohort studies on the topic,” according to Mark A. Frankle, MD, from the Florida Orthopaedic Institute in Tampa.

To bring some clarity to the issue of treatment options for these fractures, Dr. Frankle and his colleagues teamed up with researchers from the Foundation for Orthopaedic Research and Education, also in Tampa, for a retrospective review of surgeries he had performed between January 1999 and December 2018 on patients with 2-, 3-, and 4-part proximal humerus fractures.

“We aimed to look at almost 2 decades of my experience with proximal humerus fractures to determine what methods of surgical management resulted in superior outcomes, and also to explore whether it is possible to identify patient factors that predetermine optimal surgical management,” Dr. Frankle said.

Peter Simon, PhD, Director of Translational Research at the Foundation for Orthopaedic Research and Education, said the researchers “focused on patient characteristics (age, gender, ASA score), diagnostic factors (fracture type by Neer, treatment option); and clinical outcomes and complications.” They hypothesized that the surgical treatment selected would correlate with patient age, ASA score, and Neer fracture classification, he said, and that patient age and the type of surgery would affect range of motion, fracture healing, and the reoperation rate.

The study included 425 shoulders (419 patients; 6 cases of bilateral arthroplasty) that had open reduction internal fixation (ORIF; n=211), hemiarthroplasty (n=108), or reverse shoulder arthroplasty (RSA; n=106) for treatment of proximal humerus fracture. Most patients (48%) had 4-part fractures, followed by 41% with 3-part fractures and 11% with 2-part fractures. The researchers included in the data analysis only those patients with serial clinical and radiographic examinations and a minimum of 12 months of follow-up. Patients who were under age 18, had insufficient follow-up (less than 1 year), lacked appropriate postoperative radiographs at the last visit, presented with segmental fractures, or had concomitant ipsilateral extremity fractures were excluded.

The clinical examination evaluated forward flexion – a more reliable measure than internal or external rotation – at 3 and 6 months and at final follow-up of a 1 year or more. Anteroposterior, lateral Y view, and axillary view radiographs were done at 2 or 3 weeks, 6 weeks, 3 and 6 months, 1 year, and annually thereafter, with the researchers recording union, non-union, malunion, and hardware complications. Due to the traumatic nature of the injuries, preoperative data were not available for most of the study population.

As they had hypothesized, the researchers found that age, ASA score, and fracture classification were associated with specific surgical treatments: Older patients with higher ASA scores typically underwent RSA, while younger patients with lower ASA scores typically underwent ORIF. Patient-reported outcomes showed significant improvement in all 3 treatment groups during the study period, with no differences seen among the groups (Figure 1). 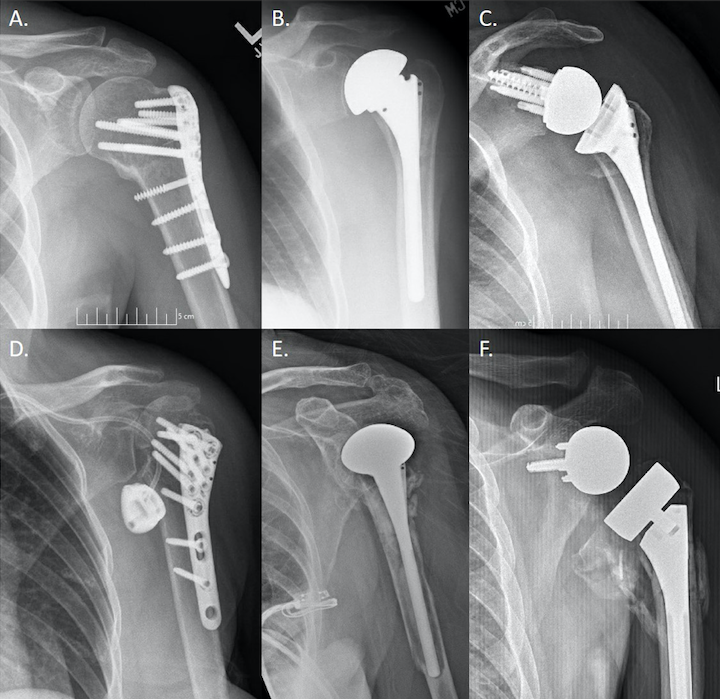 Dr. Simon noted that patients who underwent ORIF were more likely to achieve radiographic union than patients who underwent hemiarthroplasty or RSA: 89%, 79%, and 77%, respectively (P=0.005). However, the rate of reoperation was significantly higher in the hemiarthroplasty and ORIF groups compared with the RSA group: 15.7%, 17.5%, and 6.6%, respectively (P=0.029).

The higher reoperation rates for hemiarthroplasty and ORIF reflect that these procedures are “dependent on tuberosity healing to provide good cuff function,” Dr. Frankle said. “That can be extremely challenging. With RSA, one does not need a fully functional cuff, so there is no requirement for excellent tuberosity healing.”

In addition, 23% patients had at least 1 fall postoperatively, with 73% of those falls resulting in a fracture.

Key Findings – and a Big Surprise

Dr. Frankle considers 2 of the study findings to be especially significant.

“First, this study confirmed that patients with more comorbidities, who are often older, tend to have more severe proximal humerus fractures, as defined by Neer. Those patients will more likely be treated with arthroplasty,” Dr. Frankle said. “Younger patients with fewer comorbidities will most likely undergo surgical treatment with ORIF. This may seem intuitive to many surgeons, but it has not been previously reported on this scale.

“Second, up to a quarter of patients with proximal humerus fractures will fall [at some point after surgery], and out of this group, three quarters will sustain another fracture. Therefore, increased clinical counseling on fracture prevention is warranted. And it should include patient balance improvement through physical therapy and evaluation of bone density to reduce the incidence of future fractures.”

The number of falls and subsequent fractures was the biggest surprise for Dr. Frankle, who said the reason this patient population is prone to falls is unknown. “We can only speculate that there is a relationship between fall risk and features of balance, cognition, osteopenia, etc.,” he said. “Further research is warranted to explore the causality.”

For now, “surgeons should automatically consider some patients with proximal humerus fractures to be at risk of having additional fractures later in their life.”