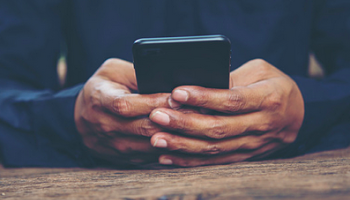 When patients’ hip or knee replacements were delayed in response to COVID-19 surges, chatbots delivering encouraging messages provided a boost to patients’ mental and physical health: Twice as many of the patients who received the messages informed by psychotherapy experienced meaningful clinical improvements compared with patients who did not receive the messages.

“We think it is very significant that we saw benefits in both mental and physical health,” said the study’s lead author, Christopher Anthony, MD, associate director of Hip Preservation at Penn Medicine and an assistant professor of Orthopaedic Surgery in the Perelman School of Medicine at the University of Pennsylvania.

“This demonstrates the importance of the relatively unexplored area between a patient’s psychological well-being and their joint function.”

The study findings were published in the Journal of Arthroplasty.

Particularly in the early stages of the COVID-19 pandemic, elective surgeries such as total joint arthroplasty were postponed at hospitals across the US as surges in the virus strained hospital resources. Dr. Anthony and his study co-authors wanted to help patients at their institutions manage their ongoing pain and boost their hopes while their surgeries were on hold.

Toward that end, they used an automated system that delivered text messages twice a day to the delayed joint replacement patients. Every text was informed by a psychotherapeutic concept called Acceptance and Commitment Therapy (ACT), which emphasizes a focus on a patient’s own goals for themselves and their health while directly addressing feelings of pain or disappointment.

For example, one message said, in part, “If you are experiencing some pain today, we encourage you to acknowledge it and then turn your focus to the things in your life that matter most to you.”

A total of 90 patients were randomized to receive or not receive the messages. Patients were enrolled for 2 weeks, and their conditions were clinically assessed at the beginning and end of that period.

Overall, patients enrolled in the text messaging system scored better on all measured outcomes except for anxiety, in which neither group showed improvement. The researchers found that 31% of patients who had received the texts experienced a clinically significant improvement in mental health measures, compared with 25% of those who had not received the texts. And although 15% percent of those in the texting program experienced a decline in mental health, more than twice as many in the non-text group experienced a decline as well.

Dr. Anthony previously used this texting program in study designed to decrease the number of prescription opioid pills used by joint replacement patients following surgery. [1] That effort was shown to result in a third fewer opioids being taken and also coincided with a reduction in experiences of pain.

With the evidence he’s gathered across these studies, Dr. Anthony believes that a program like this could have significant benefits in future crises.

“We would like to see our methods utilized by others and implemented in practice given the ongoing pandemic needs,” Dr. Anthony said. “We really think this could help some people.”