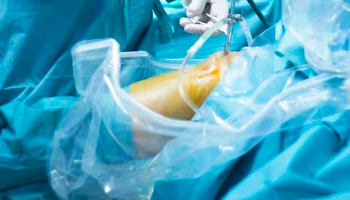 Few studies have directly compared the effectiveness of anterior cruciate ligament (ACL) reconstruction with that of ACL repair, a less-invasive but less commonly performed procedure to treat a torn ACL.

A retrospective analysis presented at the American Orthopaedic Society of Sports Medicine’s Annual Meeting 2022 adds to the literature on the topic, with the researchers finding that patients in their study who underwent ACL repair had better outcomes than those who underwent ACL reconstruction.

The researchers evaluated clinical and functional outcomes for 150 patients, 75 patients in the ACL repair group and 75 in the ACL reconstruction group. Patient were matched according to:

The minimum follow-up period was 2 years.

Isokinetic testing was used to evaluate strength deficits compared with the contralateral limb at 6 months postoperatively. At the final follow-up visit, surgeons recorded:

Patients in the ACL repair group had significantly better mean hamstring muscle strength on the operative versus the contralateral leg compared with their counterparts who underwent ACL reconstruction (P<0.0001).

At a mean final follow-up of 30 +/- 4.8 months, the ACL repair group had significantly better FJS than the ACL reconstruction group (P=0.017). No significant differences were observed between groups for the Lysholm, Tegner, and ACL-RSI scores. The ACL repair group met non-inferiority criteria for subjective IKDC scores and knee laxity parameters (side-to-side anteroposterior laxity difference and pivot shift) when compared with the ACL reconstruction group.

Patients experiencing failure of the ACL repair were significantly younger than those whose repair did not fail, 26.8 years vs 40.7 years, respectively (P=0.013). No significant difference in rupture rates was observed between groups when only patients older than age 22 were considered (P=0.157)